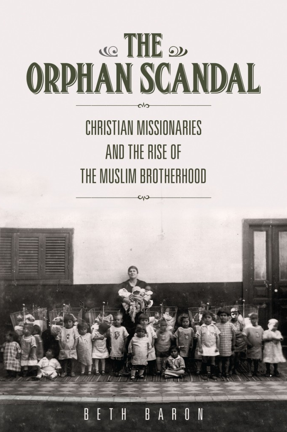 A review in The Revealer
Posted by Maurice Chammah at 9:43 AM No comments: 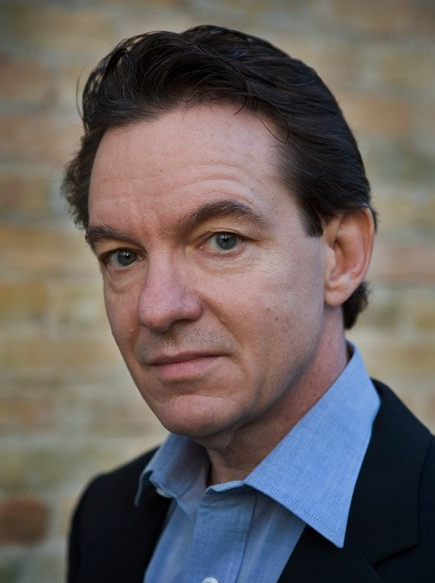 An Interview at Guernica
Posted by Maurice Chammah at 7:00 AM No comments: 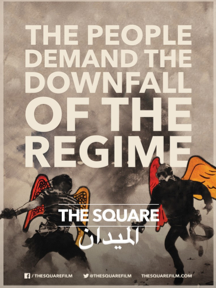 Two years after they began, the Egyptian revolutionary uprisings of early 2011 would have been an easy, ripe subject for a documentary film; the riveting images of crowds running and tear gas and fists raised, demands made and met, a dictator of three decades crumbling before the empowered masses.

On the other hand, the politics of Egypt’s last several years would provide a vexing topic; the numerous competing protagonists, the bureaucratic complexity, the subtle historical influences of every twist and turn, the moral compromises made by every participant.

The Oscar-nominated film ‘The Square,’ which premiered at Sundance a year ago and on Netflix last month, basks in a celebration of the secular-minded activists who became the dominant voice of the 2011 uprisings. Chief among them is Ahmed Hassan, a wiry, boyish speechmaker who exults in his movement’s triumphs and despairs when things turn sour. Filmmaker Jehane Noujaim, who partially grew up in Egypt, lingers on his impassioned pleas. “When we were united we brought down the dictator,” he tells a crowd at Tahrir Square at one point. “How do we succeed now? By uniting once again.”

As a chronicle of political enthusiasm, ‘The Square’ succeeds gorgeously. But it falls prey to much of the tunnel vision that marked the activists’ own transition from stardom to irrelevance. The activists tried to speak for a highly religious public, failing to understand the appeal of the Muslim Brotherhood and more fundamentalist Islamists like the Salafi movement. By not engaging with these groups, they paved the way for the military elite, also a primarily secular group, to divide and conquer. Noujaim herself identifies strongly with the secular, and mostly wealthy revolutionary protagonists — like her, they speak English and identify with American cultural norms — and it’s tempting to see the film’s blind spots as her own discomforts with the religious realities of her country.

Read the rest at The Revealer 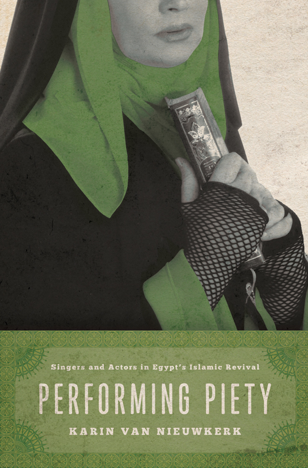 Mickey Rooney, Chris Tucker, Kirk Cameron, Bob Dylan, Mr. T. This list of celebrities, which you don’t see very often, represents some of the bigger names who reinvented themselves as born-again Christians. Of the group, only Cameron really left the mainstream entertainment business to star in Christian films like Left Behind and Fireproof. Many others made the transition with less fanfare. Mr. T mostly speaks at small community churches. Chris Tucker has said almost nothing publicly.
But together these celebrities show us something else. They represent a slow and broad turn towards evangelical Christianity that permeated American popular culture throughout the second half of the twentieth century.  Their born-again narrative tapped into a broader cultural movement that by the 2000s had already found a place in American political life, in Jimmy Carter, the Moral Majority, and years later in George W. Bush’s oft-professed faith. Born-again politicians and born-again entertainers create a context for one another, and allow non-famous Americans to see their own decisions to join a church and have a personal relationship with Jesus Christ as part of the mainstream.
That dynamic has been easier to understand since I began exploring it in the context of Egypt, a country that also saw a huge swing towards public religiosity at the same time that Islam found a voice — albeit a constantly repressed one — in the country’s political life. The US had Jimmy Carter, who talked about being born again only to lose an election to Ronald Reagan’s merger of the far right with evangelical Christianity. Egypt had Anwar Sadat, who bolstered his image as a pious Muslim just as he crushed radical Islamists. Carter lost a second term to his co-religionists. Sadat was assassinated by his.
Danish anthropologist Karin van Nieuwkerk, explores these dynamics of religion and public life in her new book, Performing Piety. A study of celebrities who publicly renounced “sinful” lifestyles as dancers, singers, and actresses, the book looks at how they reinvented their public images as beacons of worship,
preaching, and charity.

Read the rest at The Revealer
Posted by Maurice Chammah at 7:01 PM No comments:

Email ThisBlogThis!Share to TwitterShare to FacebookShare to Pinterest
Labels: Music 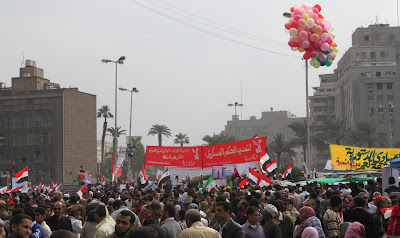 There was something slightly unsatisfying about the classes on the politics and history of the Middle East that I took as an undergraduate. Something about the texture of life? The truth beneath the truth? I couldn’t articulate that feeling, but I picked up Naguib Mahfouz’s The Cairo Trilogy, a dense family epic that spans the two world wars. I didn’t put it down for two weeks, and when I swam back up for air, 900 pages later, I pulled out my laptop and looked up study abroad programs.
I kept reading Egyptian fiction as I studied at the American University in Cairo, in 2009, and then became a journalist and returned for a year in 2011. It’s a constant feature of Egyptian literature to incorporate specific, real locations. With a few exceptions, nobody sets their scenes “somewhere in Cairo.” They pick a neighborhood, a block, an alley, or a street corner. I’d read a story or novel set in an area, and then travel to it, and while I never knew exactly what I was looking for, fiction reshaped the way I understood my surroundings. It made reality feel more vibrant, like the feeling you’d have reading Faulkner and then driving through Mississippi.
But even if you haven’t traveled to Egypt, and don’t plan to, you can learn a vast amount beyond the headlines through Egyptian literature. Here’s an introduction to some of the big names in translation, organized loosely by theme over the benchmarks of the last few years: the first protests, military rule, the elections, and the coup. Not all Egyptian fiction is political, of course, but in a country that has been roiled by upheaval for decades, many novels take political events as their starting point or background.
Read the rest at American Short Fiction
Posted by Maurice Chammah at 9:06 AM No comments:

On Piety: Egypt, Islam, and the Muslim Brotherhood 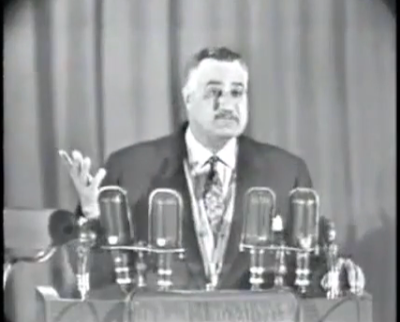 I've got a short essay up at The Revealer about the current violence in Egypt. Writing this involved digging back through some of the anthropological studies I pored over while writing my thesis on sound in Cairo in 2010.

“The first thing he asked me was to make wearing the headscarf mandatory in Egypt,” said Gamel Abdel Nasser, addressing a crowd from behind a bank of microphones. The first Egyptian president was describing a meeting with the head of the Muslim Brotherhood in 1953. At this point their relationship was still cordial, although his government would later arrest and torture members of the movement.
The crowd, however, was not cordial. “Let him wear it,” someone shouted. Others laughed. Nasser grinned. Egyptian women, especially in cities, seldom covered their hair.
“If you cannot make one girl — who is your own daughter — wear the headscarf,” he said, “how do you expect me to make 10 million women wear the headscarf, all by myself?”
Read the rest at The Revealer
Posted by Maurice Chammah at 4:09 PM No comments:

The Death of Egypt's Jewish Leader 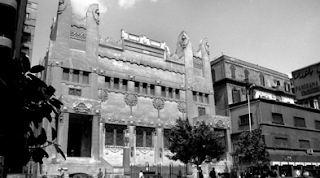 Earlier this month, Carmen Weinstein, who for decades had led Egypt’s dwindling Jewish community, died at her home in Cairo. She was 82. Obituaries ran in The New York Times and the Wall Street Journal. But the irony was she never in her life granted these publications interviews. Lucette Lagnado, a Wall Street Journal reporter and a bestselling-memoir-writing Egyptian Jew herself, wrote of Weinstein, “I found her tough, acerbic, abrasive, combative-and brave. I tried to woo her, citing my background as a fellow Cairene-Jew. But she had no use for journalists and regarded us with suspicion.”

I profiled Weinstein for The Revealer last year, and found that she took an interest in me only because I had written about a Passover seder on my own blog, and had not told her I had a journalistic interest in her community (the difference between a blog and a more official publication seemed clear to her, if not to me). One afternoon when my mother was visiting me in Egypt from the U.S., we had all shared a coffee in the back office of her family’s print shop in downtown Cairo, near a McDonald’s and dozens of clothing stores. Her desk was piled high with stacks of paper that framed her queen-like, austere presence. As I told her how my father, a Jew, had left Syria — choosing the path she had always refused, leaving a place of birth because it was no longer welcoming — I detected some warmth and understanding. And I do mean “detected.” You really had to be paying attention.


Read the rest at The Revealer
Posted by Maurice Chammah at 11:14 AM No comments:

Email ThisBlogThis!Share to TwitterShare to FacebookShare to Pinterest
Labels: Judaism

On Sonallah Ibrahim's 'That Smell' 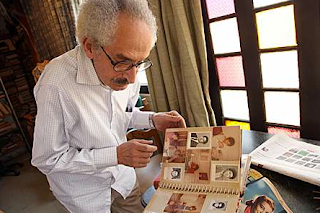 Few non-Western countries are granted the cultural space to have more than one literary representative to the English-speaking public. Often, a Nobel Prize marks out that space. For Turkey, there’s Orhan Pamuk. For China, right now at least, it’s Mo Yan.
For Egypt, over the last half a century, it was always Naguib Mahfouz, author of the magisterial “Cairo Trilogy” and “Children of the Alley.” Most of his works have been translated, The Paris Review has interviewed him, The New Yorker extensively reported his 1995 assassination attempt, and The New York Times ran an obituary when he died in 2006. Because of his international recognition, he is a towering figure in Egyptian literature. His novels are easy to find in Cairo’s bookshops, and his statue overlooks a busy square from behind his trade-mark tinted glasses.
But right at this moment, two years after a revolution that may have ushered in years of social upheaval, Mahfouz’s sharply etched realism and the epic scale of his most famous novels don’t square with the Egypt of the American imagination, an Egypt of politics, protest, and tear gas. Mahfouz wasn’t a dissident—he held a government job for years—and so his fiction, while the guiding light of a literary revolution, doesn’t have the ring of political revolution.
For that we have Sonallah Ibrahim, a 73-year old novelist who was once jailed for his Communist activism and whose first work, That Smell, was recently published in a new translation by Robyn Creswell, poetry editor at The Paris Review and a professor of comparative literature at Brown University.
Really more of a monologue than a novel, That Smell is the first-person story of a man who has just been released from prison. Ibrahim himself spent most of his twenties as a political prisoner under Nasser, and he felt that in order to capture the daze of reentry into regular society he needed a new style, which he later called “telegraphic,” influenced by the newspaper copy he had written as a journalist.
Read the rest at The Revealer
Posted by Maurice Chammah at 3:23 PM No comments:

Email ThisBlogThis!Share to TwitterShare to FacebookShare to Pinterest
Labels: Literature

Destiny and Defiance in Port Said 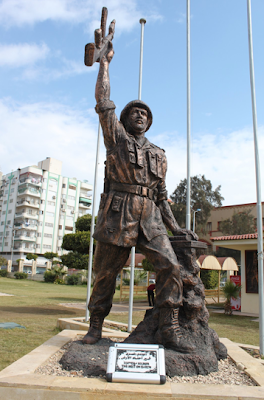 “Don’t go to Port Said,” a security guard told me in February 2012, standing on a street corner near the train station in Ismailia, about an hour away, down along the Suez Canal. “It’s a dangerous city, filled with thugs.” He shook his head and looked resigned. It was just a few weeks after the news had come out of Port Said; news of a soccer game turned violent, of beatings in the stadium, of knives and swords and stones and fists and dozens of dead.

Read the rest at The Revealer
Posted by Maurice Chammah at 12:46 PM No comments: 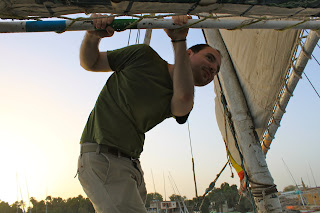 Emily Smith and I would like to present this nifty travel guide to off-the-beaten-path destinations in Cairo and throughout Egypt.

Maurice Chammah
I studied the history of Egyptian media while on a Fulbright grant, 2011-2012. More here: www.mauricechammah.com

Other writings and activities: